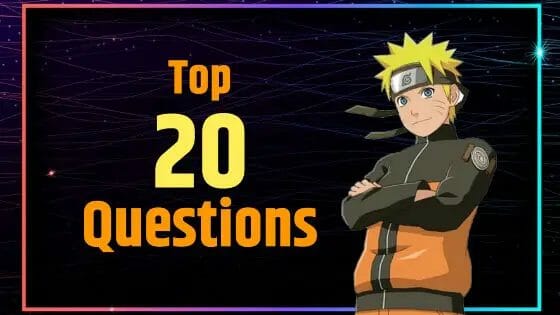 20 Answers to the Most Frequently Asked Questions About Naruto

Naruto Fans are Growing Day by Day in the World of Animes.

All Fans are Loyal to this Anime and deeply desire the qualities present in Various Characters from Naruto & Naruto Shippuden Anime.

Fans usually look for Answers to Popular Queries (and ofcourse the unpopular ones).

As Most Fans Search For, Here is a

List of 20 Answers to the Most Frequently Asked Questions About Naruto.

When is Naruto’s Birthday ?

Naruto’s Birthday is on October 10th.

What is Naruto’s Age ?

In Naruto Shippuden Anime, his age is 15–17 Years.

What was Naruto’s Age When He Graduated From Ninja Academy ?

When Naruto Graduated from Ninja Academy, his age was 12 Years.

As he grew older, he became a Moral and sensible man.

What is Naruto’s Height ?

At the End of Naruto Shippuden or start of Boruto, his height is 180 cm (almost 6 Feet).

What is Naruto’s Weight ?

What is Naruto’s Blood Type ?

His Blood Type is B.

Who Voices Naruto in Japanese ?

Who Voices Naruto in English ?

Other People who voice Naruto at Specific Moments are:

Naruto wears Orange colour because It is associated with joy, sunshine, and the tropics.

He wears orange because people will probably notice that colour, as it’s eye-catching.

Why Does Naruto Always Say Dattebayo ?

“Dattebayo” or “Believe It” is Naruto’s catchphrase which he used in most of his sentences. This created a way of making Naruto’s speech more distinctive and unique.

Dattebayo (Believe it) did not come through any culture or tradition, whereas it is to be noted that he inherited this from his mother.

Kushina Uzumaki used to say Dattebane (You know) at moments when she got Excited or Angry.

Kushina hoped her son (Naruto) would not inherit this habit from her but He actually did.

Why Naruto is the Best Character ?

Naruto is one of the Greatest Protagonists because he shows the qualities of an Ideal human being.

He shows us true value of perseverence, never giving up, hard work and everything in between.

Naruto is also the best character because of his warm heart and desire to create Peace.

Why Naruto has Whiskers ?

Naruto got whiskers around his face due to the influence of Kurama (9-Tails) when he was in Kushina’s womb.

Were Naruto and Sasuke supposed to be Together ?

Almost Everyone wants to put Sasuke and Naruto in lovers relationship, but that’s not what was planned in Anime nor Manga.

Despite all theories saying Naruto & Sasuke were meant to be Together, I’ve a bit different view.

Naruto & Sasuke were not meant to be together. This is because, although they were best friends (and rivals) but they were actually meant to be siblings.

Masashi Kishimoto (Writer of Naruto) actually created Naruto as Protagonist and didn’t condsider adding Sasuke to Manga until someone suggested him to create a Rival of Naruto (that would spice up the story).

They were actually meant to be siblings because of them being reincarnations of Ashura & Indra (who were basically brothers).

So, Naruto and Sasuke were always meant to be Rivals and not lovers, that sums up everything there it to it.

Were Naruto and Sakura supposed to be Together ?

At that moment, it had been decided these two couples will end up together.

That’s not the only time where it is shown who they love, proofs and hints are present in the whole Anime.

That brings us to the next Question.

Why Naruto is not Namikaze ?

Naruto belongs to Uzumaki Clan and called “Naruto Uzumaki” because there is a meaning behind it.

During the Third Shinobi War, Minato had gained several enemies, They didn’t want to lose a chance to get revenge from Minato.

After Minato’s death, Naruto was given Uzumaki name instead of Namikaze to prevent him from the enemies and foes of Minato Namikaze.

That’s why Naruto was named Uzumaki and not Namikaze.

Are Naruto and Karin Related ?

Naruto and Karin are related to each other becuase of the Clan. They both belong to clan Uzumaki.

Can Naruto use Genjutsu ?

Yes, Naruto can use Genjutsu but he was never shown using it in Naruto or Naruto Shippuden.

However, According to Fans, Naruto used a Simple Genjutsu in Boruto against Shin Uchiha. It was not mainly a Genjutsu but simply a sight of Unlocked Kurama inside Naruto which Feared Shin.

But there are limitations to it. He can only fly in Six Paths and Six Paths Sage Mode (SPSM) when he has Truth seeking orbs.

No, Naruto could Fly when he had Six Paths Chakra and Truth Seeking Orbs. But in Bijuu Mode, he can’t fly.

Why Naruto is so Good ?

It is a result of the amazing character advancement they have centered after, during the entire series up until this point.

All fundamental characters depicted in Naruto have their own story.

They don’t simply come and go away.

This character improvement, ties the watchers with the story.

Your Comments and Sharing on 20 Answers to the Most Frequently Asked Questions About Naruto  Motivates and Encourages us to Answer more of your Questions !
Thanks For Reading.