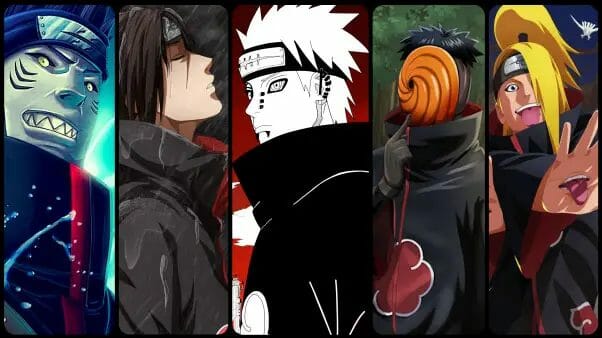 This article will be ranking the Akatsuki members from weakest to strongest. With the ranking, feats and statements will be given to overall explain the character’s ranking.

Please read the whole article for a better understanding of rankings before judging characters. If you miss the information mentioned here, you’ll not understand the intent of the order, Thanks!

An important point to mention is that this list will include only the members of the Akatsuki who were active in the hunting of all the Jinchuriki’s. Basically, the Akatsuki members are present in Naruto Shippuden.

As you all might be aware that there were several Akatsuki members throughout Naruto and Naruto Shippuden. Some of them were killed, some betrayed (Orochimaru), etc. It would be impossible to track down all the Akatsuki members and rank them so this list specifically ranks only the most active members.

Ranking Akatsuki is quite complex considering how close every character is to each other so read this article with an open mind because every ranking is well researched.

So let’s get started:

This is pretty obvious. Zetsu is the weakest member of the Akatsuki. Zetsu isn’t particularly good at fighting. His reason for being a member is also not to hunt any Jinchuriki but to spy and provide valuable information to the Akatsuki.

Zetsu being a user of Earth Style can go through walls or the ground itself. This gives him tremendous travel speed to go anywhere he wants within minutes. Thus, he usually spies on different fights, events, and classified discussions that happen in the shinobi world. Apart from this quality, it is directly stated that Zetsu is not a good fighter and he would lose to any member of the Akatsuki.

Hidan is not outrageously weak or anything. But compared to others on this list you just can’t rank him higher. He doesn’t have any astonishing attack in his arsenal which would do any damage to anyone in the Akatsuki.

Once you figure out Hidan’s secret then it is quite easy to defeat him. Hidan himself claimed in the manga that he was the slowest of all the Akatsuki members. This proves that most characters can cut his head and be done with him as he needs Kakuzu to be stitched back again.

Having said all of this he is still a great and dark villain. He is unique in his own way it is just that Hidan cannot defeat a formidable opponent alone, he will always need a companion to back him up. Apart from being immortal, Hidan showed some fighting abilities when he was relative to a fatigued Kakashi. Apart from his ritual, he doesn’t have any particular feat to rank him higher.

Similar Post: All You Need To Know About Otsutsuki God

Konan ranks this low on the list is because it is very hard to scale her. She was defeated by base Jiraiya when he entered the Rain Village pretty badly. But later we see her almost killing Obito. Her attack potency scales to Orange Mask Obito and her speed scales to Sage Mode Naruto as she reacts to him when Naruto comes to meet Nagato.

Apart from the above feats, Konan doesn’t have any abilities that put her above this rank. Her main abilities are controlling paper bombs, making paper clones, making the innumerable amount of paper bombs, and exceptional speed.

Despite being this low on the list she shouldn’t be underestimated because Konan with preparation time and on her home turf which is the Rain village, scales far higher than most members in the Akatsuki. She can manipulate a lot of things in the village including rain and water. She almost killed Obito because she knew Obito’s secret and she knew that Obito will someday come to kill her so she had loads of prep time.

Deidara is a really unique and deadly member of the Akatsuki. He doesn’t have any complex Jutsu or any secret technique. It’s simply explosive clay bombs. There are various types of clay bombs like C1, C2, C3, C4 & CO bombs. Each is deadlier than the previous one.

Deidara is highly intellectual and has great battle sense, which results in him winning a lot of battles just using explosive clay. But even after all of this Deidara cannot be ranked above this because there is a direct statement from Deidara himself in the Naruto manga where he admits that Sasori is stronger than him.

Sasori ranks seventh among the Akatsuki members. Sasori is known as the greatest puppet user in the shinobi world. His puppet mastery has gone to such extreme levels that he made a human puppet of himself and a heart so that he could live forever without any emotions.

Sasori was strong enough to kill the best magnet release user the third Kazekage who was known for using the Iron Sand. After killing the Kazekage he made a puppet using his dead body. Apart from that Sasori can summon 1000 puppets and every single puppet has a poison that can kill any opponent within minutes.

The very reason Kakuzu is this high on the list is that he is technically immortal. He basically has 5 hearts and any opponent will have to kill him 5 times to permanently kill him. In the meantime, Kakuzu has the ability to steal anyone’s heart.

By stealing a person’s heart, he also gains access to that person’s chakra nature and he can use it against any opponent.

Kakuzu has lived over 100 years because he keeps replacing his hearts after stealing them from someone young. His best achievement is fighting the 1st Hokage, Hashirama Senju, and surviving. In the Databook, Kakuzu is known as one of the deadliest fighters and is in the higher echelon of the Akatsuki.

Kisame is known as the tailless-tailed beast because of his humongous chakra pool. He has the highest chakra reserves in the entire Akatsuki.

Apart from that, he is also a part of the Seven Ninja Swordsman of the Mist with his blade samehada.

It can absorb chakra and drain an opponent completely. It can also absorb and cut through most of the ninjutsu. Furthermore, it can steal chakra from an enemy and give it Kisame.

Kisame can fuse with Samehada and become ridiculously powerful. Fused Kisame ranks very high on this list due to the power hacks he has.

Kisame is an ideal selection to hunt down Jinchuriki’s because of his rare abilities.

Orochimaru ranks 4th in this list which basically puts him above Kisame. Orochimaru ranks above Kisame mainly because of statements and feats. In Naruto part 1, when Itachi and Kisame come to the leaf village to kidnap Naruto, they see that Naruto is traveling and training with Jiraiya.

Itachi and Kisame spot Jiraiya from a distance where we get a direct statement from Kisame that he cannot defeat him and Jiraiya is way out of Kisame’s league. The reason I’m talking about Jiraiya is because of the databook. It is stated in the Databook that Jiraiya and Orochimaru are equal which essentially puts Orochimaru above Kisame.

If we talk about feats, then Orochimaru is known to be the strongest enemy in part 1. Moreover, he has access to the reanimation jutsu through which he can summon Hashirama and Tobirama Senju. He can Summon Manda one of the strongest snakes in the Ryuchi cave and is known to be a master of immortality.

The reason he doesn’t rank higher than this is that there’s another statement where Orochimaru says he’s weaker than Itachi. In fact, a fight between Itachi and Orochimaru does happen when he was still at the Akatsuki, where Orochimaru gets trapped in Itachi’s Tsukuyomi and gets defeated.

This should be pretty self-explanatory as given the Akatsuki members Itachi ranks this high. Itachi is a master of Genjutsu and he can perform it without eye contact. He’s a great user of fire style and shadow clones. He has always been known to have exceptional speed through which he outclasses a majority of shinobis.

Apart from the above feats what really puts him this high in this list is his abilities through the usage of the Mangekyou Sharingan. He can use Tsukuyomi which basically can give you 72hrs of torture in a second, he has Amaterasu which cannot be extinguished, and the Susanoo which is known as the ultimate defense.

But due to Itachi’s deteriorating illness and a small chakra pool, Itachi cannot be higher in this list.

But as we need to give a definitive stance on the situation I decided to rank Pain at no. 2. The main reason for putting pain this high is simply because of his Rinnegan and his being from the prestigious Uzumaki clan. His Rinnegan abilities, huge chakra pool, and the Six Paths of Pain simply put him above the rest of the Akatsuki. Some of the best attacks of Pain are Chibaku Tensei (planetary devastations), Shinra Tensei (Almighty Push), and various abilities of different paths of pain.

Pain is one of those opponents that it would be near impossible to defeat in a one-on-one fight without knowing his secret and his abilities.

Obito is considered the strongest member of the Akatsuki. Although you can definitely swap him with Pain. It cannot be canonically proven who’s stronger between the 2 of them. They are quite close when it comes to power. But the main reason why I chose to put Obito at no. 1 was because of him having more Hack abilities than Pain.

As you all might be aware that Kamui is the most broken Jutsu in the Naruto verse. It gives you immense speed, access to your own personal dimension, the ability to send anyone in that dimension including your own body parts, and travel speed to any place within minutes.

The only drawback would be the chakra drainage which Obito fixed by implanting Hashirama cells within himself. In any fight, Obito doesn’t actually need to participate. He can Kamui either the opponent or himself and simply blitz the enemy.

Keeping the above abilities in mind Obito would be considered as the strongest member of the Akatsuki. But what would actually happen in a fight between Obito and Pain is too complex to analyze and very unclear.