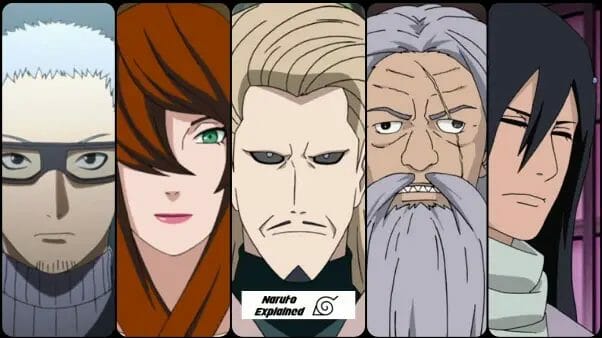 Please read the complete article to completely understand the intent of order before judging the rankings. Missing any information may lead to confusion!

We will be covering the Mizukage’s ranking in strength, skills, abilities, and overall stats, where would they scale in comparison to other Hokage’s. Here is in detail, Every Mizukage Ranked From Weakest To Strongest!

Due to the lack of focus on Kiri compared to the likes of Konoha and Suna, there are fewer feats to rely on overall.

The content of this article is well researched and will attempt to avoid bias so please read it with an open mind.

Without beating around the bush, let’s get to the topic! 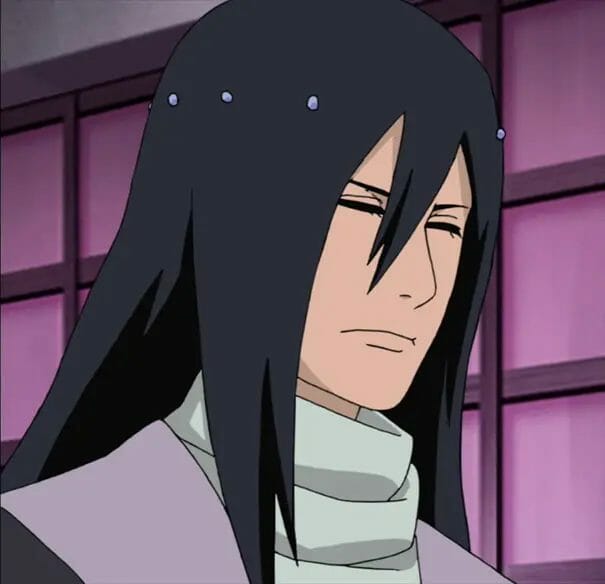 While his status as Byakuren’s bodyguard implies high levels of skills that led to him becoming Mizukage : 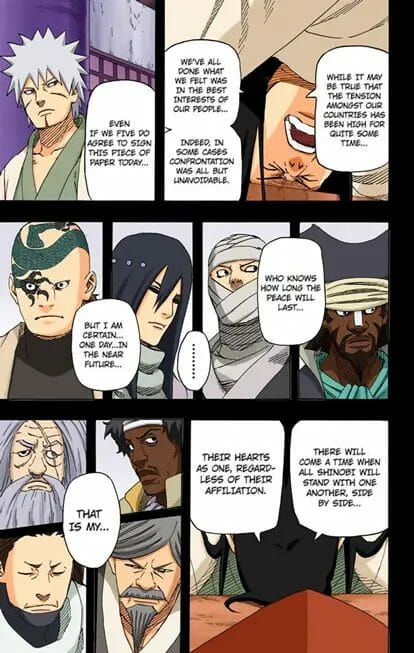 His lack of feats combined with the fact that unlike the other Kage bodyguards present in the first Summit (such as Mu, Tobirama, the Second Raikage, Shamon, and the Second Kazekage), he didn’t become immediately Mizukage but was apparently passed over in favor of Gengetsu makes him earn this last place. 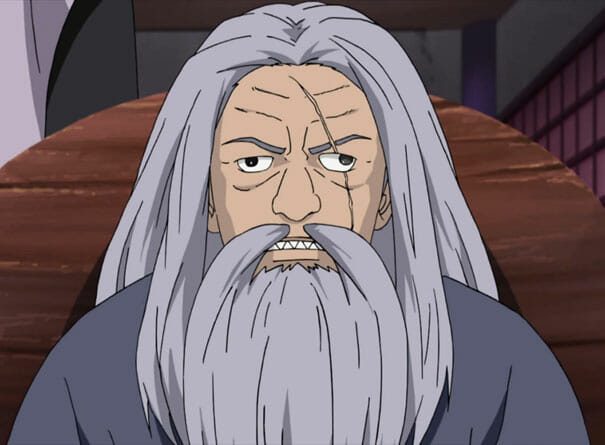 Byakuren, the founder of Kiri, is credited through his strength for being the reason Kiri became one of the 5 major villages. 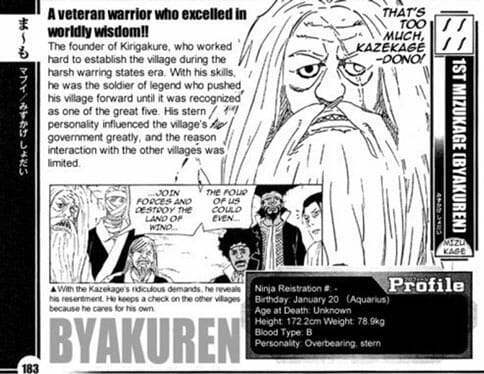 This is especially impressive given that it was done during Hashirama’s lifetime, the latter being known as one of (if not the) strongest men of his era. However, he’s otherwise lacking in feats, preventing him from being any higher. 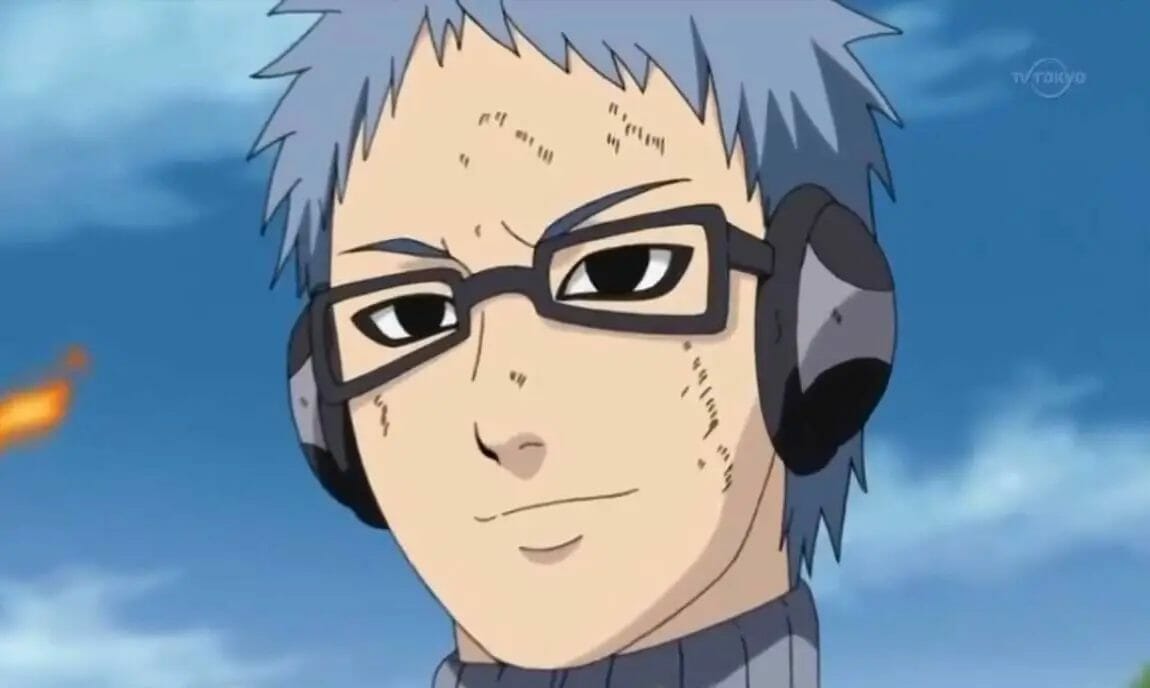 A member of the Seven Swordsmen of the Mist, Chojuro joined the group at a very young age, being 19 by the time he was introduced in Part 2 (Shippuden).

Amongst the 5 Kage of his era, the Boruto: Naruto the Movie novel notes that he’s the best swordsman as well as the best suited for assassination :

As one of the Seven Swordsmen of the Mist, Chojuro wields Hiramekarei, a very versatile sword able to store chakra, and in combat, uses that chakra in a variety of shapes, such as a hammer or a long sword.

Furthermore, it can be separated into twin swords. Through that sword, Chojuro can also settle for long-ranged attacks such as Bloody Mist Sword Art: Bone Mutilation, which affects the chakra pathway system and causes a slow, painful death :

Even before he became Mizukage, his skills were noteworthy enough for Mei to choose him as her bodyguard alongside Ao.

He has shown during the Fourth Shinobi World War quick reflexes, taking advantage of Black Zetsu focusing on Naruto to take the former by surprise and defeating him.

Upon becoming Mizukage, Chojuro was able alongside his fellow Kage to take on Kinshiki and Urashiki, both of whom are Otsutsukis, far more powerful than the average shinobi.

He also proved during his tenure that his strength wasn’t all due to Hiramekarei: While trying not to kill them, arguably harder to in his case due to his skills residing in the assassination, deliberately injuring himself and with a broken sword, he could defeat 3 of the self-proclaimed « New Swordsmen of the Mist ».

His Water Style: Great Waterfall Technique could restrain Urashiki, forcing the latter to use the Rinnegan to free himself. He can also use the Water Release: Water Spikes to impale his enemies.

Chojuro, while frequently downplayed, is a powerful shinobi of his own right, but even with Hiramekarei lacks the versatility the three remaining Mizukage have shown.

Please keep in mind that Chojuro’s place is sometimes up to debate due to his feats in Boruto, leading some fans to upscale him through these aforementioned feats. 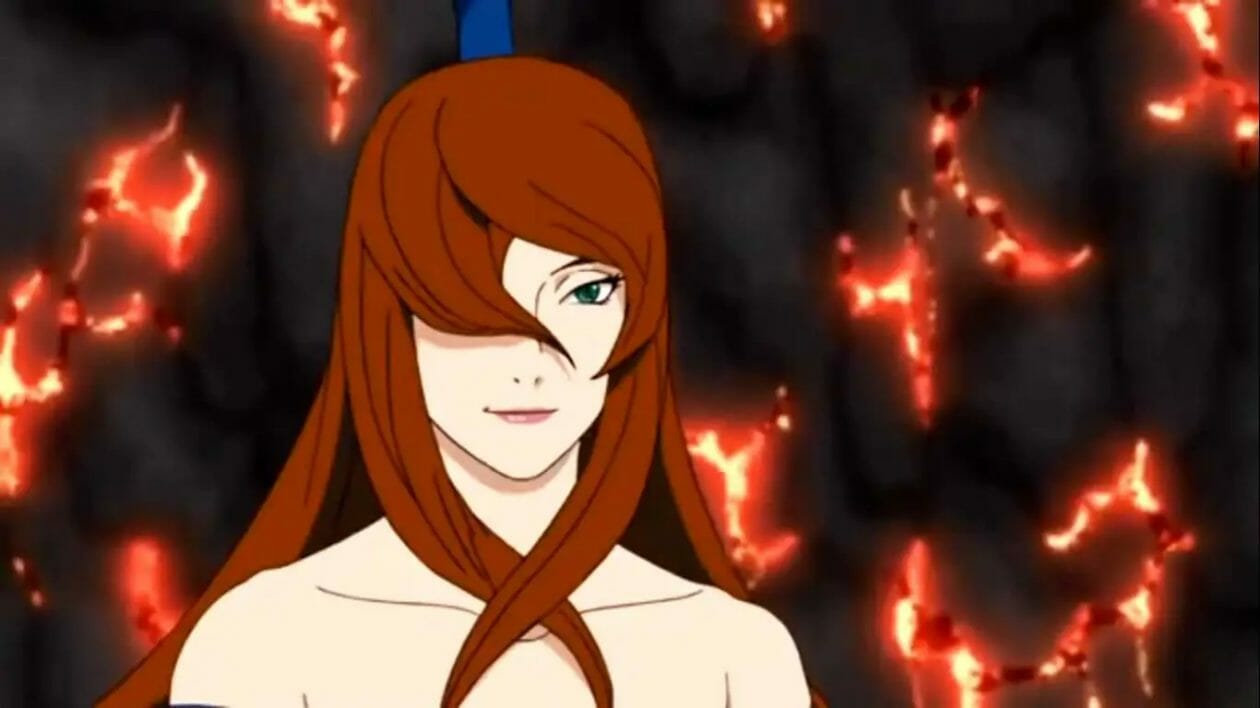 An extremely competent politician that graduated from the academy at age 9, survived Kiri’s infamous comrade-killing exam, and managed to repair the damage Obito and the brainwashed Yagura caused to Kiri, Mei Terumi is no less impressive on the battlefield.

Not only does she have four of the five elemental natures according to the fourth databook, but she also has two Kekkei Genkai’s: Lava Style and Vapour Style. 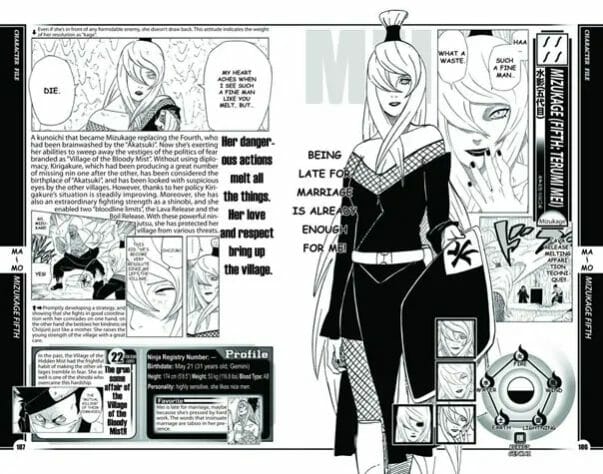 With her Vapour Style, she can create an acidic mist that can dissolve chakra-based constructs as well as people, significantly melting Sasuke Uchiha’s Susanoo and nearly killing him when she cornered him.

She can also alter its pH to prevent collateral damage, such as when Sasuke broke a wall that could’ve led to the mist reaching the other Kage. 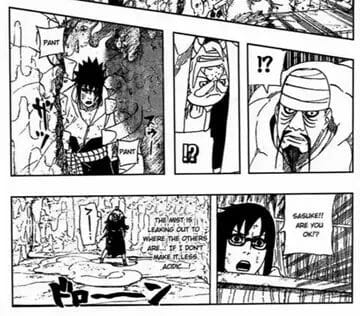 Her Lava Style — that style being noticeably different depending on the character, notably when comparing Mei with the likes of Kurotsuchi and Dodai —, allows her to spit large doses of acidic mud (her Lava Monster Jutsu) which she can either use as support, such as blocking an entry to corner Sasuke and try to kill him with her Vapour Style, either offensively, where the doses of mud she spits are potent enough for Edo Madara to be seriously worried about it. 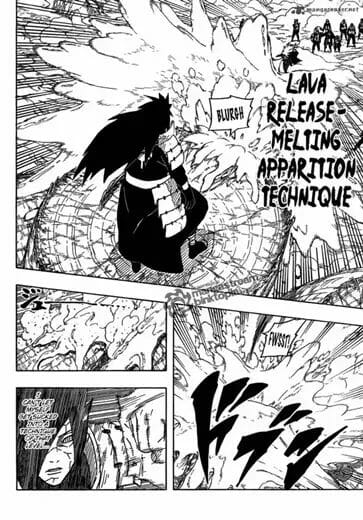 Her Water Style has also impressive attack potency as well. With it, she dwarfed Madara’s Great Fire Annihilation, which previously required a dozen Water Style users to remotely counter.

In The Last: Naruto the Movie, she used it in combination with her Lava Style to defend Kiri from the falling meteors.

(GIF ahead, kindly scroll down if it doesn’t load)

She is also noticeably smart, coming up with a plan to defend the Daimyos during her absence in the Fourth Shinobi World War, as well as figuring out Fu Yamanaka possessed her bodyguard Ao by picking up on small details, such as « Ao » requesting her to unlock the seal protecting Ao’s Byakugan, which not even her is actually able to, something the real Ao is fully aware of.

To underestimate Mei, with that in mind, is a death sentence. However, two Mizukages are stronger than her.

Before we get into the first place, please keep in mind the following two Kage’s positions are up to debate within the fandom, and that we’re going to base ourselves on consensus.

One of the few characters to have achieved the status of perfect jinchuriki, Yagura’s skill proves he’s worthy of the Mizukage Mantle. Becoming a perfect jinchuriki even at a young age according to the 4th databook : 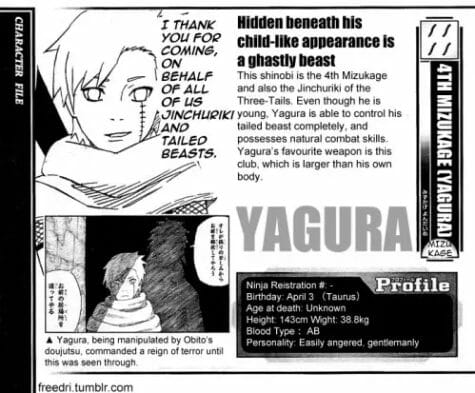 Yagura is proficient in Water Style and is implied through his hooked club to be skilled in hand-to-hand combat as well.

However, that hooked club can be used in combination with his Water Style to use the Aqua Mirror Jutsu, creating a water mirror in front of the attacking target (thus creating reflections of them) he then rotates to 90° with his club to make the reflection emerge and materialize from the mirror, before it collides with the attacking target with the same attack as the latter, thus repelling the attack entirely.

As a perfect jinchuriki, Yagura has also Isobu’s (The Three-Tails) entire moveset.

This includes techniques such as the infamous Tailed Beast Ball, the Ricochet Armoured Tower, the Shell Spear (With the latter two, Isobu curls up into a ball and bounces to either crash the enemy either move around, while also using Isobu’s spikes to add further damage) and the Coral Fist, whereby striking his opponent, Yagura creates ever-growing coral on them that restricts their movement. This proved helpful to Obito when cornering as he would’ve gotten him right then and there if it wasn’t for Gai and Kakashi’s interventions. Finally, upon being reincarnated as an Edo Tensei, Yagura, as one of Obito’s Six Paths of Pain, was given the Sharingan, increasing his combat speed through that dojutsu’s precognition, partly making up for the physical nerfs caused by the Edo Tensei. 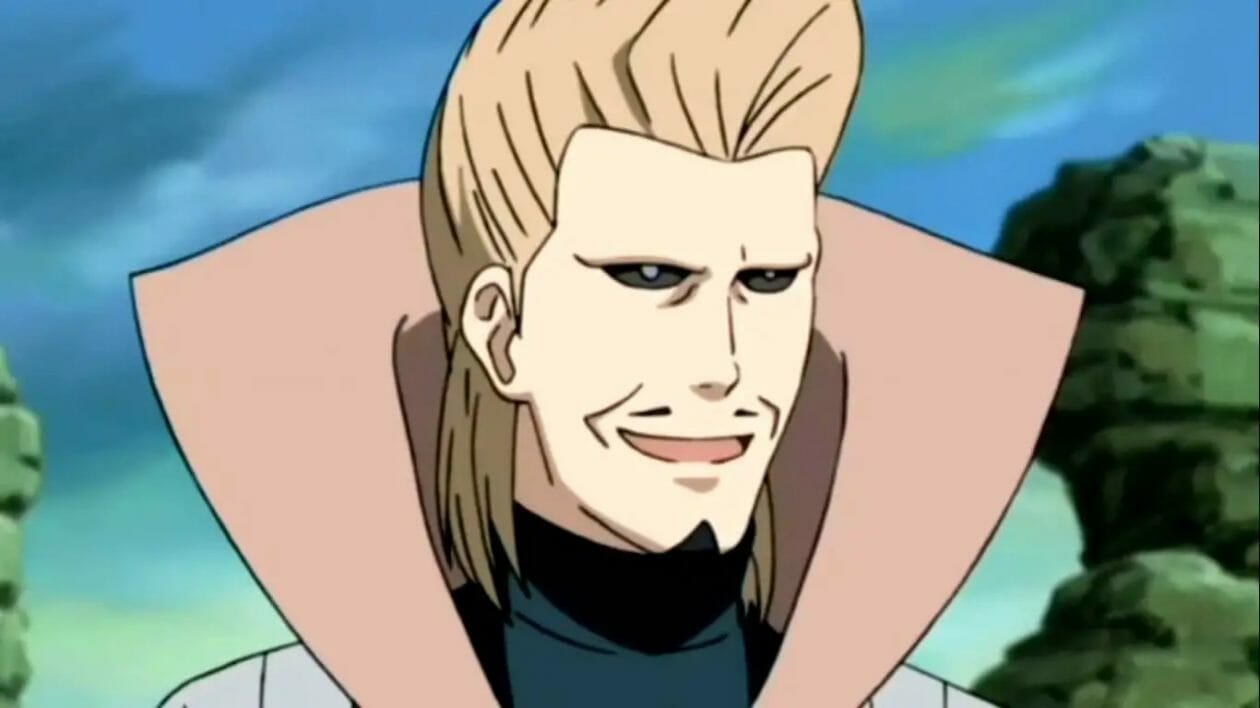 As the Second Mizukage Gengetsu Hozuki has shown he’s an utter monster on the battlefield, with an incredibly versatile skillset.

He has 4 of the 5 chakra natures (only lacking Wind Style) as well as Light Style and Dark Style.

As a member of the Hozuki clan, Gengetsu also has the Hydrification technique, allowing him to liquefy parts of his body or his entire body.

He does, however, stand out compared to the other Hozukis through his ability to liquefy himself not only into the water but also into a mixture of water and oil. 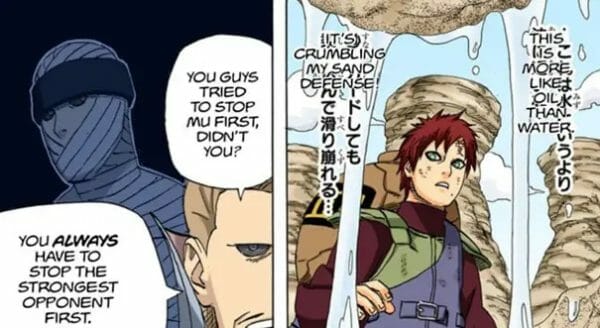 He can also use fire water bullets through his fingers strong enough to tear through one of Gaara’s Sand clones.

His Summon, the Giant Clam, generates a mist that traps anyone within it in a genjutsu and thus prevents them from locating either the summoner either the summons, unless one is a noticeably skilled sensor, such as Gaara, who could previously locate even the invisible Mu.

He can also create mirages of himself to further confuse the enemy. The clam is also quite durable, no-selling Onoki’s Stone Fist Jutsu. Onoki needed to significantly increase his weight — to the point he broke his back — to destroy it.

His taijutsu is also impressive, allowing Gengetsu to take on an entire group of Allied shinobis and defeat them despite him telling them his weaknesses. 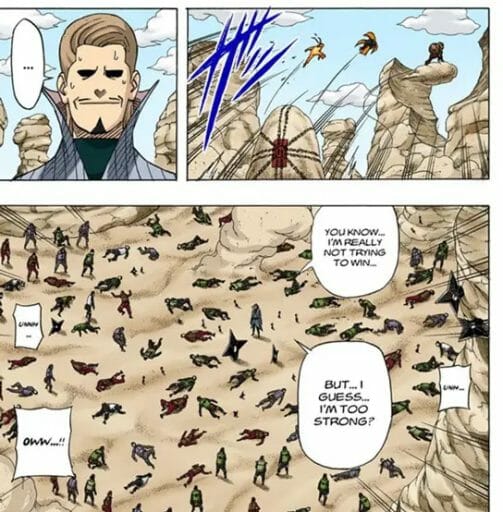 Gengetsu’s stand-out technique, however, is the Steam Imp. Gengetsu creates a water chibi clone of himself covered by a small layer of oil. He can control its temperature.

The clone is both fast and skilled in hand-to-hand combat, blitzing a couple of alliance shinobis and using a blade made of liquid in close combat.

However, what makes that clone truly dangerous is the fact that by heating the layer of oil and thus evaporating the water, the clone is turned into a bomb.

(Scroll down, Large image ahead) 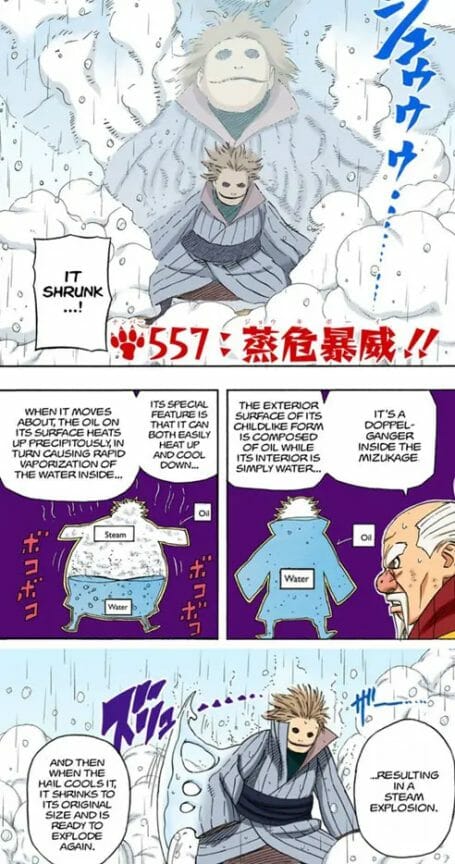 Even worse, through control of its temperature, the clone can reform itself shortly after the explosion, ready to blow up again.

Onoki notes that Mu had a lot of trouble dealing with these abilities, despite being an incredibly strong shinobi of his own right.

The aforementioned Mu, while responsible for Gengetsu’s death, was also killed by the former in the same fight, showing how impressive both shinobis truly were.

With an amazingly versatile skillset including dangerous ninjutsu, powerful large-distance genjutsu, solid taijutsu, and control of 6 chakra natures, Gengetsu stands out in a class of his own compared to the other Mizukages.

Hope You Liked “Every Mizukage Ranked From Weakest To Strongest”