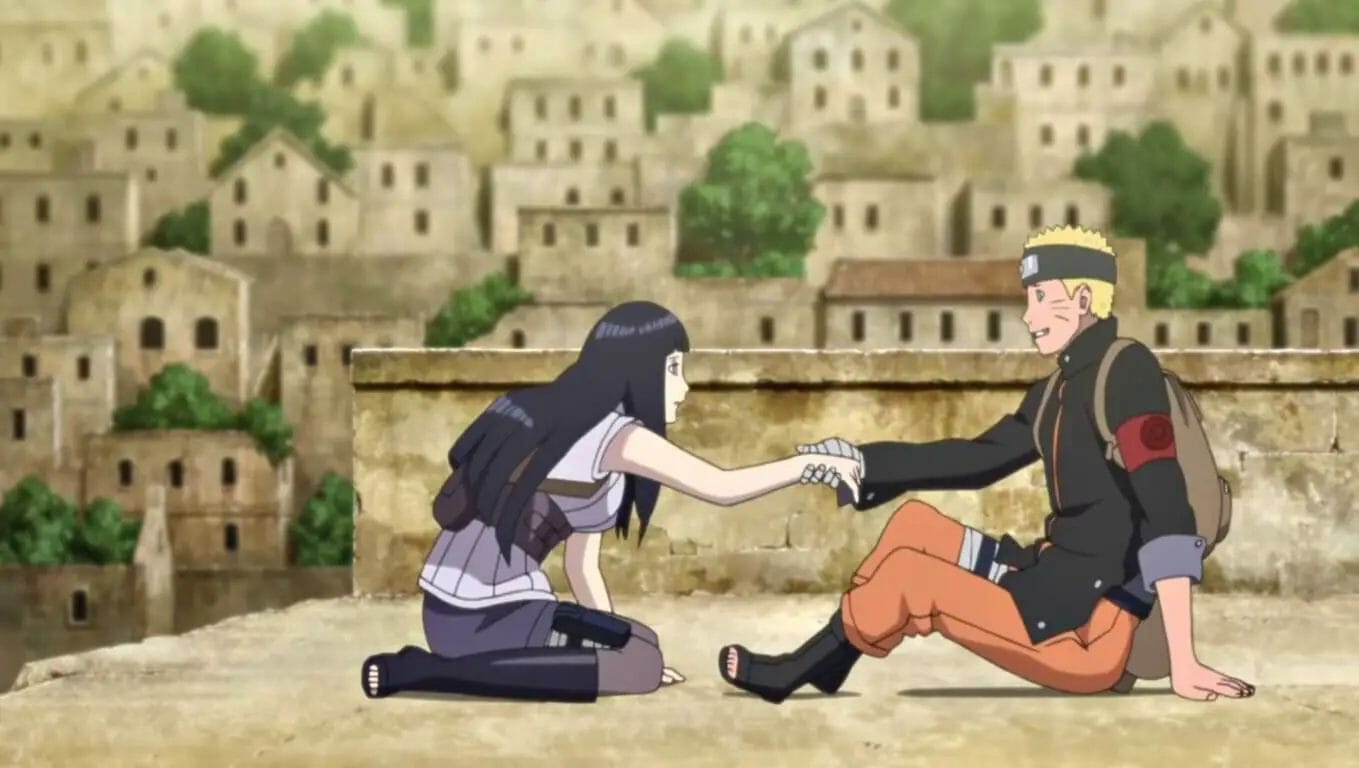 What Movie Does Naruto Fall in Love with Hinata?

Naruto falls in love with Hinata in “The Last: Naruto the Movie”.

The screenplay is by Kishimoto and it is considered canon in the continuation of the series. This movie takes place around 2 years after the 4th Great Shinobi War as is stated in the novelization of this movie.

In this movie, Naruto is 19 years old and it is a time of peace where every village is recovering and rebuilding from the damage done by the war.

Kakashi is the Sixth Hokage whilst Naruto runs various types of errands for him. The entire movie is dedicated to developing a loving relationship between Naruto and Hinata as most of the story focuses on them.

Toneri Otsutsuki kidnaps Hanabi Hyuga in order to awaken the Tenseigan and tries to get Hinata to marry him. Naruto and his teammates chase after him while Naruto and Hinata go through a journey of discovering a deep love for each other.

Why Did Naruto Marry Hinata?

Naruto married Hinata simply because he loves her.

In the movie, it is revealed that Naruto loved Hinata all along and his temporary crush on Sakura was because of his rivalry with Sasuke.

It is shown that Naruto since his academy days always had feelings for Hinata but he was too dumb to understand what those feelings were and didn’t have much time to clearly articulate them.

Moreover, they didn’t spend much time as Genin and Naruto had immense pressure on him being the nine tails jinchuriki so he got busy and couldn’t nurture his feelings for Hinata.

As a kid to compete with Sasuke he used to say he liked Sakura. Maybe on some level, he did like her, but those were temporary feelings that most teenagers have for multiple women.

In the movie, in one of the scenes, Naruto discovers that Hinata liked him since academy days and has always been loving him since then. This makes Naruto realize that they have a deeper bond than any other couple which has been building up for several decades. Naruto realizes that Hinata was the first person to accept him in the village when everyone around him considered him a monster.

Naruto soon proposes to her and they marry each other. Naruto is indeed lucky to have ended up with such a kind and caring wife like Hinata.

Why did Naruto forget Hinata’s confession?

Hinata confesses to Naruto while they were fighting Pain.

Naruto is pinned by Pain’s rods and he is not in a situation to move. Hinata seeing Naruto in a dangerous situation comes to the battlefield and fights Tendo Pain one on one.

Naruto seeing the immense risk taken by Hinata wonders why she is risking her life while she knows that she cannot defeat Pain.

This is when Hinata reveals that she has looked up to Naruto since they were kids, she has learned a lot from Naruto through his ninja way of never giving up and always trying to save his friends and etc.

After all of this Hinata confesses that she loves him and always will.

Naruto completely forgets about this after Pain is defeated. There is no direct justification in the series, but we can make some assumptions.

These are a few reasons why Naruto might have forgotten Hinata’s confession or maybe he didn’t have enough time to act on them.

Why did Hinata fall in love with Naruto?

In one of the episodes, it is revealed that Hinata was never happy in the Hyūga clan. Training every day with Neji she never liked her lifestyle. Moreover, she had immense pressure to become the leader of the clan because of her father and had to train every day to become a strong ninja which she never wanted to do. One day she runs out of the house out of sheer desperation to escape all of this and finds kid Naruto in a red scarf.

Naruto sees her crying and talks to her where they bond. Naruto opens up that he lives in a very small house and has no one in his life, no parents or friends. Yet after all of the misfortune that he has he tells her that he never cries and she should be very privileged to be in a good house surrounded by family members, this gives Hinata better understanding and she returns to her house. This was their first meeting.

In The Last: Naruto The Movie, it is revealed that Hinata met Naruto again as a kid. She was getting beat up by a group of bullies because Hinata had a weird set of eyes. 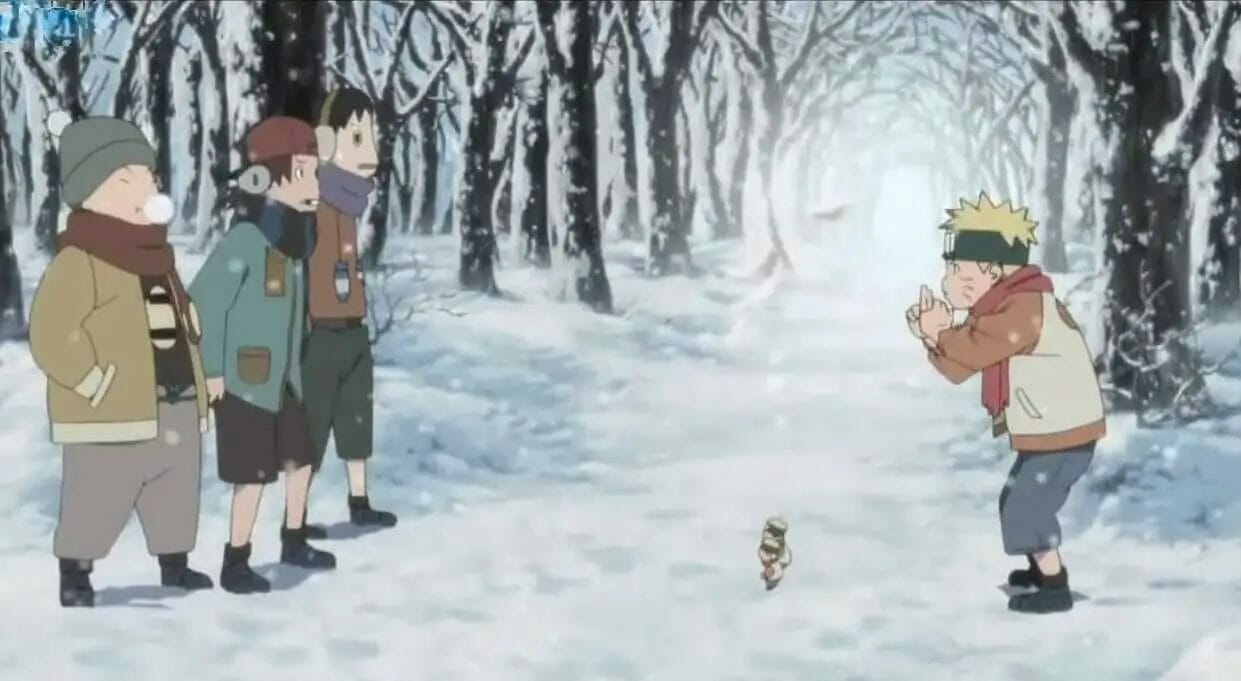 Naruto out of nowhere again wearing a red scarf saves her and gets a good beating from the bullies as Naruto himself wasn’t good and fighting.

The bullies tear his red scarf pretty bad. Naruto tells her that he will become good at fighting and protecting his loved ones. After that Naruto leaves giving the scarf to Hinata. This is where Hinata fell in love with Naruto and her feelings have only grown stronger since then.

In the movie, it is also revealed that she treasures the red scarf which he was wearing (when they first met) for several decades. She plans on stitching it up and giving it to Naruto and again confessing to him about her feelings.

Why did Naruto end up with Hinata?

The creator of Naruto (Masashi Kishimoto) had planned for Naruto to pair up with Hinata from the very beginning. Just like he had already planned for the rest of the couples in the series like Sasuke-Sakura, Shikamaru-Temari, etc.

Kishimoto had already revealed that he is not great at writing female characters and great love stories. His best-written couple is obviously Minato-Kushina.

However, he tried his best at building up Naruto-Hinata although, there wasn’t much development between the characters. We don’t see much growth between them until the Pain arc where we see, how far Hinata is ready to go to save Naruto.

Their relationship also gets more depth when Hinata is the one who supports and helps Naruto when he sees Neji sacrifice himself to save Naruto. We can say Hinata is the only person who truly understands Naruto completely as she has been looking up to him since they were kids. 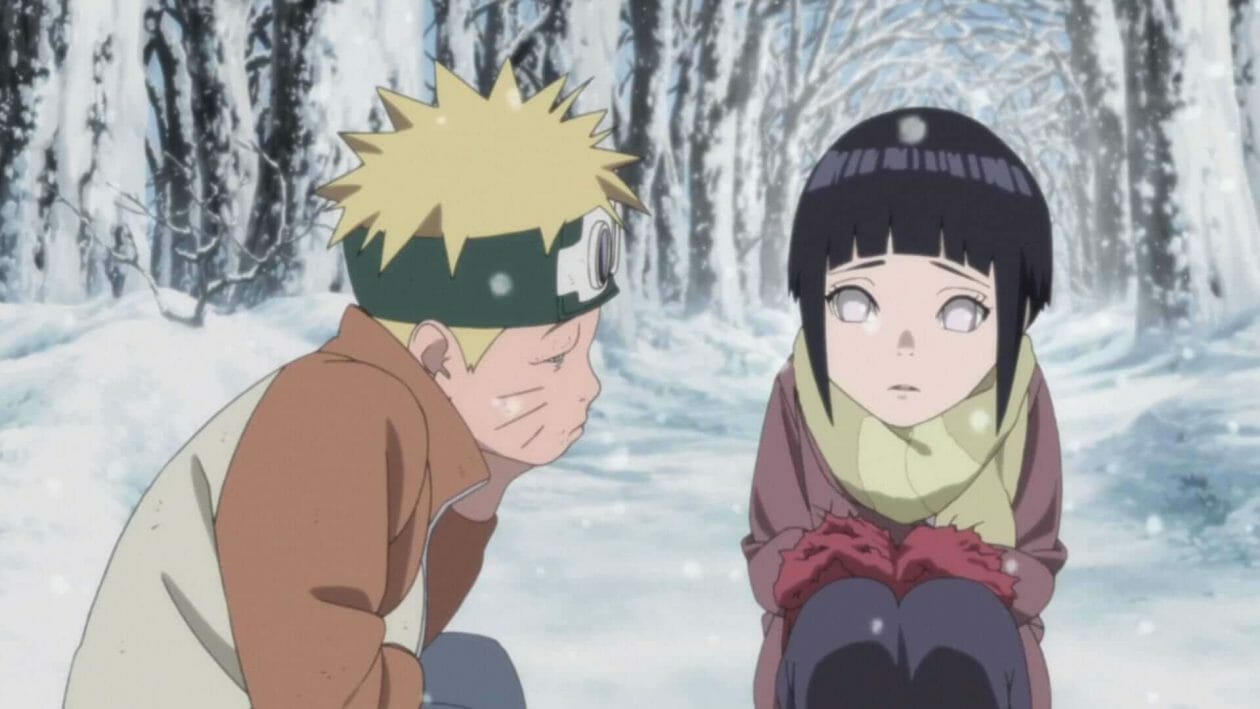 As the series didn’t have much time and space for Naruto and Hinata’s relationship to grow, the writers try to connect them in the last movie. Some fans felt the connection and some fans didn’t. The Naruto community has always had dichotomy on every topic and the famous Naruto couples were no different.

However, Naruto-Hinata (NaruHina) shares a massive fandom in the community. They are one of the most shipped couples in the world of anime and the last movie was everything most of the fans wanted. One of the reasons to love this couple was Hinata’s pure and undying eternal love for Naruto which made this couple a fan favorite and many people wanted this to happen. Kishimoto always intended this to happen and through the last movie, they successfully develop a good relationship between them which a lot of fans wanted to happen.

Is Hinata happy with Naruto?

All Hinata wanted since she was a kid was to end up marrying Naruto. She grew up looking at him going from a useless little ninja to the world’s strongest and greatest shinobi of all time.

No one is happier than Hinata as she was the one who always truly believed in Naruto and always wanted to be on his side. Now that Naruto is the Hokage who achieved his dream by saving the world, Hinata has never been prouder.

Many people say that Naruto is always at the Hokage office and never spends any time with his family and Hinata. Many people question them having any romantic husband and wife relationship.

But the important point to remember is that Naruto and Hinata married when they were around 19-20 years. After that Naruto spent around 5-6 years with Hinata as Boruto and Himawari were born. Boruto in the anime says that Naruto used to be always at home before he became the Hokage.

This basically implies that Boruto spent a lot of his first 5-6 years with Naruto before he became Hokage. Naruto and Hinata had enough time as a couple during that time. This was something that Hinata never thought could’ve happened in her wildest dreams. The time she spent with Naruto was precious and now she has the responsibility of two children and like every couple, they had their moments and are a great couple.